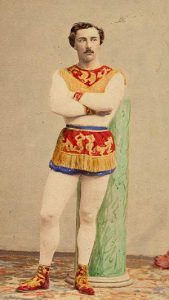 Inventor of the Flying Trapeze

From Wikipedia:
The French acrobatic performer Jules Léotard (c.1839 – 1870[1]), was the man who inspired the 1867 song “The Daring Young Man on the Flying Trapeze” (with lyrics by George Leybourne).

He was born in Toulouse, France (there is some question about the exact year of birth), the son of a gymnastics instructor. The young Jules passed his exams, and seemed destined to enter the Law, but at the age of 18 he began to experiment with trapeze bars, ropes and rings suspended over a swimming pool. He joined the Cirque Napoleon, and on November 12, 1859 made his first public appearance as a trapeze artist, becoming the first to turn a somersault in mid-air and the first to jump from one trapeze to the next.

The act lasted 12 minutes, with Léotard leaping between three trapezes, finally somersaulting to his carpet covered safety mat. This act was so revolutionary that his co-artists sponsored a banquet in his honour, and a commemorative medal was struck.

In May 1861 he made his Music hall début at the Alhambra Theatre, Leicester Square, London with his flying trapeze act. The act was performed above the heads of diners, and was extraordinarily popular. For this, he was paid £180 per week, nearly £5000 in modern terms[2].

He invented and made famous a skin-tight one-piece garment with long sleeves, which he called a maillot, and wore it for his performances. It was designed to allow unrestricted movement, and to display his musculature. This garment made its way from the circus into the ballet studios of Paris. It is now known as a leotard: the first recorded use of this term in English was in 1886.

(The French word maillot now means a swimsuit or jersey).

Jules Léotard often performed with a heap of mattresses, in case of mishap. The first safety net was deployed by a Spanish Troupe, the Rizarellis, at the Holborn Empire in 1871.


[edit] References
^ Estimates on his date of birth vary, from 1838 to 1842. However, the UK theatre museum definitively provides his age at death in 1870, as 28; without providing a year of birth!
^ Jules Leotard, at peopleplayUK

Manage Cookie Consent
To provide the best experiences, we use technologies like cookies to store and/or access device information. Consenting to these technologies will allow us to process data such as browsing behaviour or unique IDs on this site. Not consenting or withdrawing consent, may adversely affect certain features and functions.
Manage options Manage services Manage vendors Read more about these purposes
View preferences
{title} {title} {title}
Scroll to Top