An incredible Risley acrobatic act captured on two films in 1902/03. I have the films and the troupe would hold its own against any in the world today – but I know little about them so far! Can you help? 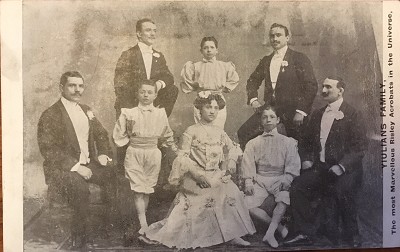 My interest in this troupe arose from finding two Pathe 9.5mm films I have put on YouTube:

The film labels and Edison and Pathe film catalogues, below, clearly use the word Julians and I followed this track to find out more about them for several years.

These famous European acrobats are shown in their wonderful feats of balancing and high-class acrobatic work. This troupe commands the highest salary ever paid to a company of gymnasts, and the sensational work they perform gives proof that theirs is justly the most celebrated in the world. The photography is beautifully sharp and distinct, and the subject most entertaining.
Summary written by Edison Catalog
—-

It was only when I came across the postcard above that I discovered the actual name may be the Yiulian’s. Below are more postcards I have since seen.

However this later postcard was from the Yulian’s was sent in 1939 from Brno in Czechoslavia, now the Czech Republic. Might the troupe have originated here? Here’s the back of the postcard – maybe someone can make sense of it?

Searching newspaper archives led me to believe both names were used by the same troupe, the Yiulian’s name being at least from 1905.

A chance discovery of a December 1905 Folies Bergere programme introduced yet another name for the act – the Yuilians – and in turn led to an attractive article from Paris qui Chante, 27/11/1904 which sadly provides no biographical information.

———————————
The Julians, Acrobats (1903)
These famous European acrobats are shown in their wonderful feats of balancing and high-class acrobatic work. This troupe commands the highest salary ever paid to a company of gymnasts, and the sensational work they perform gives proof that theirs is justly the most celebrated in the world. The photography is beautifully sharp and distinct, and the subject most entertaining.
Summary written by Edison Catalog

See the video at: www.youtube.com/watch?v=zIIRMgsSsNs

This wonderful acrobatic act can be seen on film from 1902/03. The following two listings appear in the Pathe film volumes index:

Looking at the films it is apparent both were filmed at the same location and the same time.

ALL THE FOLLOWING INFORMATION IS ABOUT JULIANS THAT I FOUND OUT PRIOR TO FINDING THE POSTCARD – AND MOST UNLIKELY TO HAVE ANY CONNECTION WITH THE YIULIANS.
———————————————————————
Details of Rose Julian can be found at www.circushistory.org/History/Contortion.htm
It includes the following paragraph:
Note: This is Rose (or Rosalie) Julian, said to have been born in Australia in 1867. Her brother was Martin Julian. The Julians traveled the Variety Hall circut as well as performing with circuses. They did perform with Barnum, Cole, Cooper & Hutchinson’s Greatest Show on Earth in 1886. Later, Martin became the manager of the well-known pugalist, Robert Fitzsimmons. After Fitzsimmons divorced his first wife, he married Rose Julian. Fitzsimmons’ first wife married Rose’s brother, Martin. At least one newspaper account states that Rose and Martin’s mother (probably Aimee/Amy) was married to Leon Samwells, possibly the Leon Samwells who was a gymnast, acrobat and had trained animals. – Judy Griffin

There was a Julian’s Circus in England in the early 1890s so there may be a connection there (poster in Evanion Collection for Julian’s Grand International Circus 1893, East Grinstead, Sussex.)

There was a circus troupe who toured regional South Australia in the early 1900s called The Flying Julians. Is this coincidence or is it a different set of ‘flying Jullians’.

1923 Jan 15 London Colisem for w/c January 15 1923 – A variety show with many acts including Holloway & Austin, The Four Famous Julians, The Arnaut Brothers and many more

In ‘Memories of Circus, Variety, etc. as I knew it’ by Henry Whiteley (pub’d 1981 tho’ written 1944), Whiteley states that ‘Bob Hanlon was the father of the trampoline act known in later years as the Four Julians’ (p22).

More recently there has been Victor Julian (?Victor Julian Yelding?) with his dog act. He appeared in the 1962 film Billy Rose’s Jumbo and on the Ed Sullivan show ‘Toast of the Town’ on several occasions in the 1960s.

Manage Cookie Consent
To provide the best experiences, we use technologies like cookies to store and/or access device information. Consenting to these technologies will allow us to process data such as browsing behaviour or unique IDs on this site. Not consenting or withdrawing consent, may adversely affect certain features and functions.
Manage options Manage services Manage vendors Read more about these purposes
View preferences
{title} {title} {title}
Scroll to Top